Ethan Minkin is a seasoned attorney and has counseled clients on a wide variety of matters. His expertise includes complex transactions, healthcare regulatory matters and complex litigation. Ethan has handled hundreds of closings, from mergers and acquisitions to finance deals and securitizations. He has also litigated hundreds of matters in his career, having been involved in many high profile matters.

Most recently, Ethan was the CEO and de facto General Counsel of a Phoenix-based biotech company. Prior to his CEO experience, Ethan has substantial experience as both a private practice attorney and an in-house attorney.

In addition to working with the Phoenix-based biotech company, Ethan was in-house with one of the world’s largest financial institutions and a national Medicaid HMO that was purchased by Aetna. Mr. Minkin began his career with the largest Phoenix based law firm, and went on to become a partner at two large national law firms.

During his career, Ethan has been recognized for his work, including being named a Southwest Super Lawyer, and has also volunteered for Special Olympics of Arizona and the Southwest Autism Research Center.

Ethan joined Nutile Law, Of Counsel, in 2018 and is only licensed in Arizona, but is not licensed to practice law in Nevada. 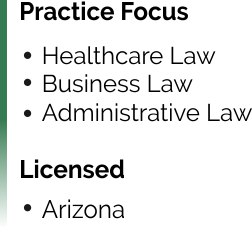