In 2016, Alia began working as an associate attorney at Wilson Elser Moskowitz Edelman & Dicker LLP, where she focused her practice on healthcare litigation. During this time, Alia represented physicians and other healthcare professionals, hospitals, surgical centers, and other healthcare entities in medical malpractice actions. She recently obtained summary judgment on behalf of a dentist in a high exposure professional negligence/dental malpractice action. Alia has also represented healthcare entities in business litigation, including peer review matters. In addition to civil litigation, Alia successfully represented physicians and other healthcare practitioners in professional licensing matters. While at Wilson Elser, Alia was also an active member of the firm’s pro bono committee and the firm’s chronic traumatic encephalopathy practice group.

Alia is licensed to practice medicine in Texas, but decided to pursue a career in law. After graduating summa cum laude with her Bachelor of Science degree in Biology with a minor in Chemistry from the University of Texas of the Permian Basin, she obtained her Medical Degree from the University of Texas Southwestern Medical School in Dallas, Texas. She subsequently completed two years of a general surgery residency in Houston, Texas, during which time she rotated at some of the best hospitals in the United States. In 2009, she obtained her juris doctorate at the University of California Berkeley School of Law (Boalt Hall).

Alia is an active member of the Clark County Bar Association, and has been an editor for the CCBA’s monthly publication, the Communiqué, since 2016. In 2018, she was awarded the Circle of Support Award for her work on the publication’s committee. Alia is also a member of the American Medical Association, the American Health Lawyers Association, and is a Fellow of the American College of Legal Medicine. She has also represented children in the foster care system through the Legal Aid Center of Southern Nevada’s Children’s Attorney Project, and was an active participant in the Howard McKibben American Inn of Court for several years. 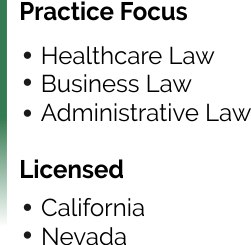